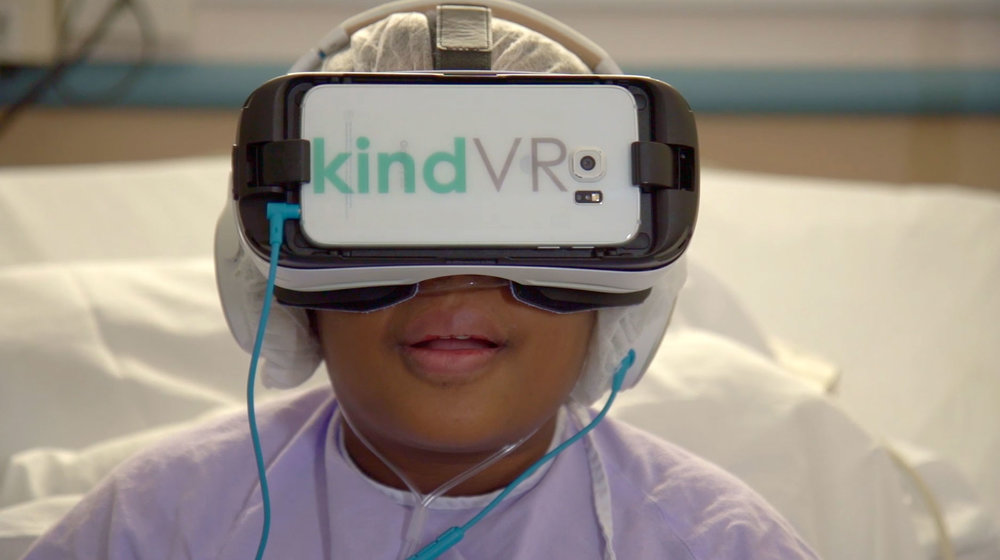 Virtual reality has shown the potential to help patients deal with pain and anxiety during difficult procedures and clinical trials. Clinical Trials Arena speaks to KindVR founder Simon Robertson to find out how the technology works and its benefits for patients, parents and providers.

Simon Robertson, a former video game developer, first tried on a virtual reality (VR) headset back in 2012 and immediately started thinking about how the technology could be applied to help people.

That night, he fell into a research rabbit hole where he discovered the work of Dr Hunter Hoffman, one of the originators of a new technique using immersive VR for pain control.

Hoffman was able to show that burn patients, while having their wound dressings changed, were reporting significant pain reduction while being immersed in VR.

“I was really impressed by this research but disappointed to discover that interactive, immersive distraction wasn’t being used at burn centres and paediatric hospitals,” says Robertson. “So, I kind of made that my mission.”

They were struck by the research but told Robertson to “slow down” and had him become a child life specialist volunteer. He spent about a year working bedside with haematology patients, mostly those suffering from sickle cell disease. At this time no VR was involved. Instead, Robertson used the opportunity to get a sense of the common procedures that these patients go through and imagine what integrating VR to help them would look like.

From there, Robertson partnered with Dr Anne Marsh, director of the Paediatric Sickle Cell Clinic and associate haematologist/oncologist at UCSF Benioff, who became the primary investigator on the first clinical trial for KindVR – the VR therapy firm Robertson founded in 2014 – looking at harnessing VR for sickle cell inpatients during vaso-occlusive pain crises.

Patients with sickle cell disease are burdened with excruciating episodes of pain and often require hospitalisation for intravenous opioids to help relieve it. Opioids, although necessary for episodes of intense pain, often are not sufficient and come with a myriad of other problems like addiction, adverse reactions and declining long-term efficacy.

In the UCSF Benioff trial, Robertson and Marsh enrolled a convenience sample of 30 sickle cell patients aged eight years or older, all of whom were admitted with a vaso-occlusive pain episode.

Results showed pain intensity dropped significantly after a single VR session, with improvements in sensory, affective, evaluative and temporal pain domains. The use of the VR sets, which were programmed with KindVR Aqua, a calming virtual underwater world, was very well received by patients, parents and hospital staff.

KindVR now has 10 clinical trials underway with 10 leading hospitals and three trials that are completed and published. Other indications where KindVR’s tech is being trialled include a variety of cancer procedures, laceration repair, preoperative stress, MRI practice and IV insertion.

Robertson says VR’s ability to reduce pain and stress all comes down to distraction –directing patients’ attention to a virtual world leaves a little less bandwidth for the brain to process the pain signals that go up the spine.

“The truth is, distraction is something that’s been known by providers and parents for many years,” Robertson says. “My first day working in Oakland Children’s I saw child life specialists use a vibrating pillow on the side of the patient, asking them to focus on that physical sensation while they did a difficult procedure on the opposite side of this patient’s body while simultaneously playing a game of I Spy – a more cognitive form of distraction.

“I was watching this kiddo be distracted on two fronts, and it became clear to me that that’s the magic of VR. It’s not necessarily a panacea, it just happens to be a little bit better at hijacking the brain senses, by controlling what you see and hear and your sense of presence in the environment. It pulls you out of that hospital. Really that just adds up to a more effective distraction technique. I see VR as just another step forward in being able to distract patients from processing that pain, and giving them something to look at.”

KindVR has a number of ‘worlds’, or applications tailored specifically to the hospital setting. When we think about VR, we normally imagine exciting immersion where the wearer might experience riding a rollercoaster or being chased by a T-Rex. While these situations sound fun, they are not suitable for a patient in hospital who is having an IV insertion or using very powerful medication to manage their pain.

“Patients deserve access to software that’s designed for their specific patient population or the procedure they’re going through,” says Robertson. “That was the foundation for me as a designer, to design for these procedures.”

Study shows use of injectable implants to measure body temperature